History of the Evron Centre

The original building, we believe, was built in the mid-1800s (early Victorian).   There is an old map showing the building in place in 1850 and it is reputed that Charlotte Bronte visited the family here during her stay in Filey.  The building was two houses known as No’s 1 and 2 South Cliff Villas, and in the early 1900s was owned by Mr Arthur Mayo-Robson, (later Sir Arthur Mayo-Robson), a surgeon who had a practice in Harley Street, London (surgeon to Queen Victoria) and his sister Mrs Gertrude Croke, wife of a physician in Hull.  They were used as family homes and in the 1901 census it is recorded that these houses were owned by the Mayo-Robson family.  Many houses were built during the 1800s for well to do families and you will see many houses called ‘Villas’, and it was at this time the Crescent was built by Mr John Wilkes Unett (1770-1856) and became a popular destination for many celebrities and even royalty staying at the Royal Crescent Hotel which you can see to this day.

The period of the building that I can tell you about began in 1907, when the Sisters bought it and turned it into a Convent known locally as the Convent of the Sacred Heart.   But first I will explain why the Sisters came to Filey.  The Sisters are a French teaching order having started in the 1682 by Perrine Thulard (1654-1735), a widow who wanted to help the poor and uneducated in her home town of Evron, near Le Mans south of Normandy and bordering Brittany.  Her brother in law (Pierre Thulard) encouraged her to dedicate her life to God. The Sisters soon became established as a charity and they were known as the Sisters of Charity of Our Lady of Evron.  By the late 1800s early 1900s the anti-church republican French government forbade members of religious orders to teach and the nuns were persecuted (two nuns were executed for helping wounded soldiers during the ‘Reign of Terror’). In 1904 a law was passed to separate Church from State.  Because of the anti-clerical legislation of the Government of the Third Republic in France the Sisters made the decision to extend their mission into England. The Mother Superior at the time decided that the nuns must look for somewhere else to establish themselves and she contacted the monks at Ambleforth College, one being Father Eugene Roulin (1860-1939) who set about to look for a suitable place for the nuns to establish a school and a Catholic Religious Order.  He looked at Filey and as there was no Catholic Church in the town at that time and the Catholics had to travel to either Scarborough or Bridlington for Mass etc., he considered this a suitable base.  So it was in October 1904 that 12 nuns, who could not speak a word of English, set sail for England and arrived by train to Filey on 22 October 1904.  They were met by the Catholic community, Father Roulin and the Local Council and shown to a house on the Crescent, believed to be ‘Cromwell Villa’ or ‘Cromwell House’’.  They established a school for the poor children in Filey and made a Chapel in one of the room in the Villa so Catholics could pray there.  The locals accepted the nuns in the town as by having a Catholic Chapel; it encouraged more tourists to come to the town.  By 1905 the nuns decided they needed to buy their own property and bought Villa Ambrosia to be used as a Free School on the sea front just below the Evron Centre building.  It is still there to this day.  In 1907 as the school’s reputation became  established and the wealthy families of Filey and district wished their daughters to be educated by nuns, the Sisters decided to buy no’s 1 and 2 South Cliff Villas as they had just come onto the market.  It is not known why the Mayo-Robson and Croke families decided to sell but it was lucky for the Sisters of Evron.  They paid an extra £100 for a footpath down to Villa Ambrosia; this building was kept on as a Free School for the poor Catholics in Filey.

The Evron Centre building at that time only had a ground and first floor and as the sisters wished to establish a boarding school they decided to build on a further storey which became the dormitories and a bay window was installed in one of the ground floor rooms so this could be used as the art room.  They made various alterations to the inside of the building in order to create a gym come hall.  It is recorded that 46 workmen, mostly fishermen, carried out the alterations and when they had finished the nuns prepared them a meal to say thank you.  It is also pointed out that if these local men had not been employed by the Sisters they would have been out of work during the winter when fishing was very difficult and the men could not go out to sea, so the townsfolk were grateful to the nuns.  The school was officially opened in 1908 and amongst its first pupils were the sisters of the Duke of Norfolk (a leading Catholic layman) who took French lessons whilst they were staying at Ravine Villa (in Glen Gardens now the site of the Ravine café).  Girls were taught to be young ladies fit to run a household and to be good wives and mothers.   St Mary’s Catholic Church was also built in 1908 and is well worth a visit.  This gave a boost to the tourist industry as Catholics could now come to Filey as well as Scarborough and Bridlington.

In 1912 boys were accepted as day pupils up to the age of 9, the most famous old boy was Charles Laughton, the actor who was taught French and Music. The young Laughton benefitted from his French lessons as many years later he appeared on a Paris stage in a play by Moliere, and it was reported that Charles Laughton spoke French so well as he was educated by French nuns.  However Charles Laughton was not so eager on Music and often hid in the Sycamore Tree in the garden in order to avoid the lesson.  The tree with the seat round is still in the grounds.     By 1920 there were 22 boarders and 80 day pupils which rose to 70 boarders in 1950.  In 1913 the nuns ran adult education classes in needlecraft at T’awd Ship in Queen Street, quite a novelty in those days.   In 1924 the school was inspected by HMI and became an efficient secondary school and in 1925 lay teachers were appointed.  In 1938 the Sisters sold Villa Ambrosia on the sea front in order to buy No’s 1 and 2 Belle Vue (now Belle Vue Flats).  Catholic children were still educated free of charge and given food and clothing as necessary.   In 1951 inspectors came to inspect the school again and it was recognised as an efficient Independent Grammar School, this meant they could now accept pupils whose fees were paid by the LEA.  This resulted in an influx of parents wanting their daughters to go to the Convent; boys were still accepted up to the age of 11 but only as day pupils.  Pupils now numbered 350 and there were several lay teachers.  The sisters decided to extend the school and link South Cliff Villas to No’s 1 and 2 Belle Vue.  The extension cost £18,000 and was completed in time to commemorate 50 years of the nuns being in Filey – see the plaque on the wall of the new extension (1904 to 1954).  This new building was official opened in 1958 housing two classrooms (Rooms 21 and 22), two music rooms and a cloak room on the ground floor, the new chapel with a gallery on the first floor dedicated to St Joseph (this room is now the Conference Suite) and on the second floor was the new art room (the old art room is now the Bay room) together with a bedroom. Corridors linked the two buildings.  The Belle Vue building was now used as classrooms and extra dormitories.   In 1950 a school magazine ‘The Ship in the Bay’ was begun and a school song composed.  The Filey Convent Old Girls Association was formed in 1949 and is still going strong to this day; a reunion taking place each year on the Sunday after Easter Sunday. A commemorative plaque was erected by the FCOGA in 1999, to mark the 50th anniversary of the FCOGA, at the old staff entrance.  In the 1960s finances from the LEA were altered and there was no more financial assistance for independent schools, numbers of pupils dropped and in December 1968 the school sadly had to close for the Senior School and in May 1969 for the Kindergarten.

Former well known pupils included the mother of Stephen Sacker, the BBC journalist and Lana Bowen-Judd who under the pseudonym Sara Woods is a successful crime novelist and Charles Laughton as mentioned above.

The Sisters emerged themselves into the local community, and in fact Sister Marie Xavier was very interested in local history and it was she who discovered the original medieval stone altar from St Oswald’s Church which had been vandalised in the Reformation and used as a doorstep.  It was lifted and is now inside the church at the rear.    Nine Sisters are buried in St. Oswald’s Church cemetery.

The premises and land covering 2.11 acres were sold in 1969 for £50,000 to Goulston Banking Corporation of London on behalf of a housing developer that later went bankrupt and were resold in 1971 to Filey Urban District Council and became Filey’s new Town Hall and Council Chamber.  Just before the building was sold the Old Girls’ Association asked if the stained glass windows in the Chapel could be removed, this was agreed and now the window are in each of the town’s churches – St Mary’s, St Oswald’s, St John’s, the Methodist Church and Salvation Army Citadel – thus keeping a link with the Convent in the town.

Under reorganisation in 1974 the building was acquired by SBC.   Filey Town Council met in the building and there was a small Tourist Information Centre and offices.  In 1993 Filey Town Council bought its own building in Queen Street and moved out of this building.  It was in 2000 that European Regeneration money was made available to SBC and they decided to refurbish this building.  They did extensive alterations and created a new Tourist Information Centre (now the Post Office) by knocking down what was the Kindergarten, a computer suite on the first floor (now the Police Station), community rooms for hire and small started units for businesses also the installation of two lifts and altered much of the internal configuration.  The Gym is now the Concert Hall and the new Chapel is now the Conference Suite, both of which can be hired by the general public.  It was at this time they decided to rename the building and asked for suggestions from the community.  An Old Girl and her mother suggested ‘Evron Centre’ and so we still have a link to the Sisters of Charity of our Lady of Evron.   SBC agreed to the name.

Outside the gardens have been extended to cover the tennis courts and the ‘Alley’ as it was known to pupils is now ‘Nuns Walk’ and is cared for by the Friends of Filey’s Parks and Gardens and they have uncovered paths creating a wild plant area and put in bird boxes and a picnic area.  This area was used by the nuns for prayer and meditation and recently the FCOGA have placed a commemorative plaque in the one remaining grotto.  The Sycamore Tree is still in existence.

To celebrate the 70th anniversary of the Convent Old Girls Association a further plaque was placed on the door at the front of the building between Rooms 21/22.  Also a collage recounting the history of the building has been placed in the entrance corridor of the Evron Centre.

The original Mother House in Evron is still in existence and is now a nursing home for elderly nuns from the order. 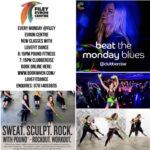 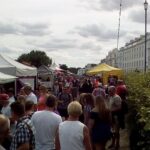